Water vapor, and maybe even rain, has been found in the atmosphere of a super-Earth within the habitable zone – in a world’s first. The research was detailed by University College London and University of Montreal researchers in Nature Astronomy and arXiv.
Buzz60

For the first time, water vapor has been detected in the atmosphere of another planet with temperatures that could support life, a new study says.

The planet, known as K2-18b, is eight times the mass of Earth, and is now the only planet orbiting a star outside the solar system, or “exoplanet,” known to have both water and habitable temperatures.

The discovery, published Wednesday in the peer-reviewed British journal Nature Astronomy, is the first successful detection of an exoplanet orbiting in its star’s “habitable zone,” at a distance where water can exist in liquid form.

“Finding water in a potentially habitable world other than Earth is incredibly exciting, said study lead author Angelos Tsiaras of University College, London. “It brings us closer to answering the fundamental question: Is the Earth unique?”

K2-18b was discovered in 2015 and is one of hundreds of super-Earths – planets with a mass between Earth and Neptune. With a temperature that’s similar to that of the Earth, “this planet is the best candidate for habitability that we know of right now,” he said. 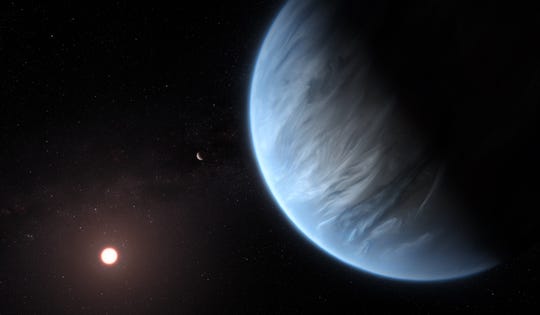 An artist’s conception shows the planet K2-18b, its host star and an accompanying planet. K2-18b is now the only super-Earth exoplanet known to host both water and temperatures that could support life. (Photo: ESA/Hubble, M. Kornmesser)

The detection of water vapor – which is water in its gaseous phase – was made possible with data obtained by the Hubble Space Telescope, Tsiaras said.

Far out: ‘We have seen what we thought was unseeable’: First photo of a black hole revealed

The planet orbits the cool dwarf star K2-18, which is about 110 light-years from Earth in the constellation Leo. Given the high level of activity of its red dwarf star, the planet may be more hostile than Earth and is likely to be exposed to more radiation, according to the study. The radiation would be harsh enough to quickly inflict any human visitors with cancer, the study authors said.

While it’s thought to be rocky, no one knows if water’s flowing on the surface.

“With so many new super-Earths expected to be found over the next couple of decades, it is likely that this is the first discovery of many potentially habitable planets,” said study co-author Ingo Waldmann, also of University College, London. “This is not only because super-Earths like K2-18b are the most common planets in our galaxy, but also because red dwarfs – stars smaller than our sun – are the most common stars.”

A Canadian-led team announced similar findings Tuesday. In a paper just submitted to the Astronomical Journal for publication, these scientists suggest it might even be raining there.

“This represents the biggest step yet taken toward our ultimate goal of finding life on other planets, of proving that we are not alone,” the study’s lead astronomer, Bjorn Benneke of the University of Montreal, said in a statement.

The authors of the Nature Astronomy paper conclude the planet provides an excellent target for follow-up observations, which will provide further insights into the composition and climate of other habitable-zone planets.

“This study contributes to our understanding of habitable worlds beyond our solar system and marks a new era in exoplanet research, crucial to ultimately place the Earth, our only home, into the greater picture of the cosmos,” Tsiaras said. 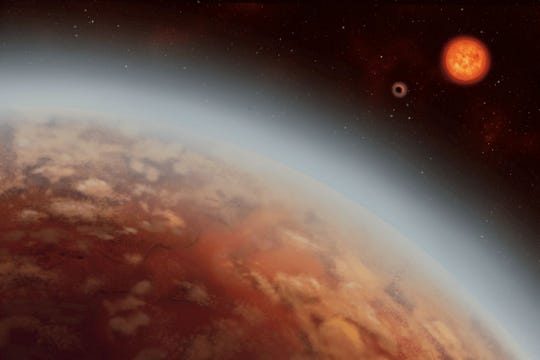 An artist’s conception of the exoplanet K2-18b. (Photo: Alex Boersma)

We live in an age of climate disaster. Now what?

Even C-Span Is Piqued: Senate Puts Limits on Trial Coverage

Does the Australian Open Come Too Early?

These Haunting Photos Capture The Vanishing Wildlife Of Africa

Sevilla and the Science of Soccer’s Summer Transfer Window

‘Gladiators … ready!’ Whatever became of Wolf, Jet, Rhino and the show’s other stars? | Television & radio